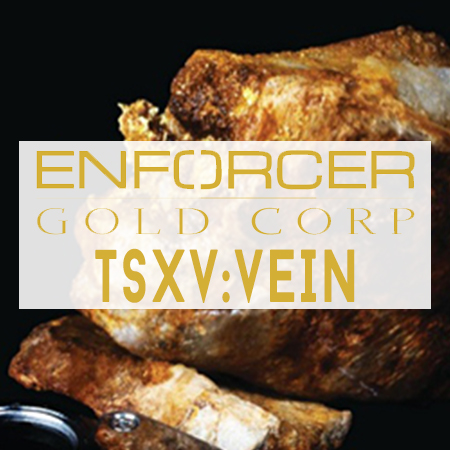 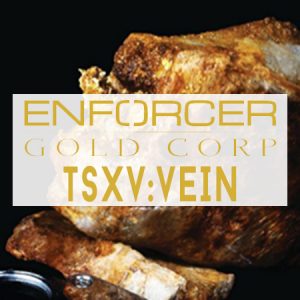 Enforcer Gold Corp (“Enforcer” or the “Company”) (TSX-V: VEIN; FSE: N071) is pleased to report on the commencement of diamond drilling at the ​Montalembert ​Gold Project. ​Enforcer has contracted Orbit Garant Drilling Inc. of Val d’Or Quebec and has budgeted for 5,000 to 8,000 m of drilling in 2017.

“We are very excited to get drilling on the Galena and No. 2 veins and test the continuity and grade of the mineralized structures at depth. This will be the first ever large-diameter core drilling on the veins, which from our experience will be key to assessing their potential. The Galena and No. 2 veins are currently the most advanced drill targets on the property, but there are several other high-priority targets that we will be advancing to drill-ready stage in the coming months.”

The drilling program will initially target the veins at ~25-50 m centres and to a vertical depth of ~200 m. The program will utilize HQ-sized coring equipment with a core diameter of 63.5 mm or 2.5 in, allowing for a much larger sample size and visual representation of the geology and mineralization. Limited drilling in 1950 used either EX or AX sized coring equipment with a core diameter of only 22-30 mm.

The Galena and No. 2 veins represent classic shear-hosted quartz-carbonate gold mineralization. This style of mineralization is the most significant source of gold in the Abitibi greenstone belt and is well known to be erratic in terms of grade and continuity. The veins typically pinch and swell, resulting in significant differences in width and grade over short distances. Such variability is clearly evident in the surface exposures of the Galena and No. 2 veins. Previous exploration work has also established an erratic distribution of coarse gold within the veins. The presence of coarse gold makes sampling and assaying of this style of mineralization especially challenging. The potential understatement or overstatement of grade is commonly referred to as the “nugget effect”.

Enforcer’s use of large diameter HQ coring is one means to mitigate the nugget effect, as a larger cut through the mineralized zone increases the chance of obtaining a representative sample. All samples collected within the zones will be analysed by the metallic screen method (2000 gram option), which compared to standard fire assay is considered a far more effective method for counteracting the effects of coarse gold. The method involves crushing, pulverizing and screening the entire sample, then separating 2000 grams of the final prepared pulp over a 100-micron dry screen. Coarse (+100 micron) and fine (-100 micron) fractions are then analyzed separately using standard fire assay procedures and the weighted average grade is reported.

To recap the history at Montalembert, the initial discovery of gold-bearing veins in the area occurred in 1949. In 1950, N.A. Timmins (1938) Inc. drilled 30 holes over several of the showings, including 7 holes below the Galena Vein and 3 holes below the No. 2 Vein. Despite multiple logged occurrences of veining and mineralization in the holes only 10 samples were collected, including 2 samples from the No. 2 vein. The results of this sampling are unknown. No further work was reported on these veins until 1973, when Rochelom Mines conducted a bulk sampling program on the Galena Vein. The sample averaged 12.69 g/t (0.37 oz/T) over 108.2 m. Following this program, the area lay dormant again until 2015 when Globex Mining staked the property and extended the exposure of the Galena and No. 2 veins. Channel sampling by Globex in 2016 reported several high-grade results as reported in the Company’s January 20, 2017 and March 1, 2017 news releases.