TORONTO, Nov. 1, 2018 /CNW/ – Enforcer Gold Corp (“Enforcer” or the “Company”) (TSX-V: VEIN – FSE: N071) is pleased to provide its shareholders with further details on the McKenzie Gold project located in the Red Lake Gold Camp of northwestern Ontario. Enforcer announced on October 29, 2018 that it had signed a Letter of Intent (“LOI”) to purchase a 100% interest in the McKenzie Gold property from 1082545 B.C. Ltd. 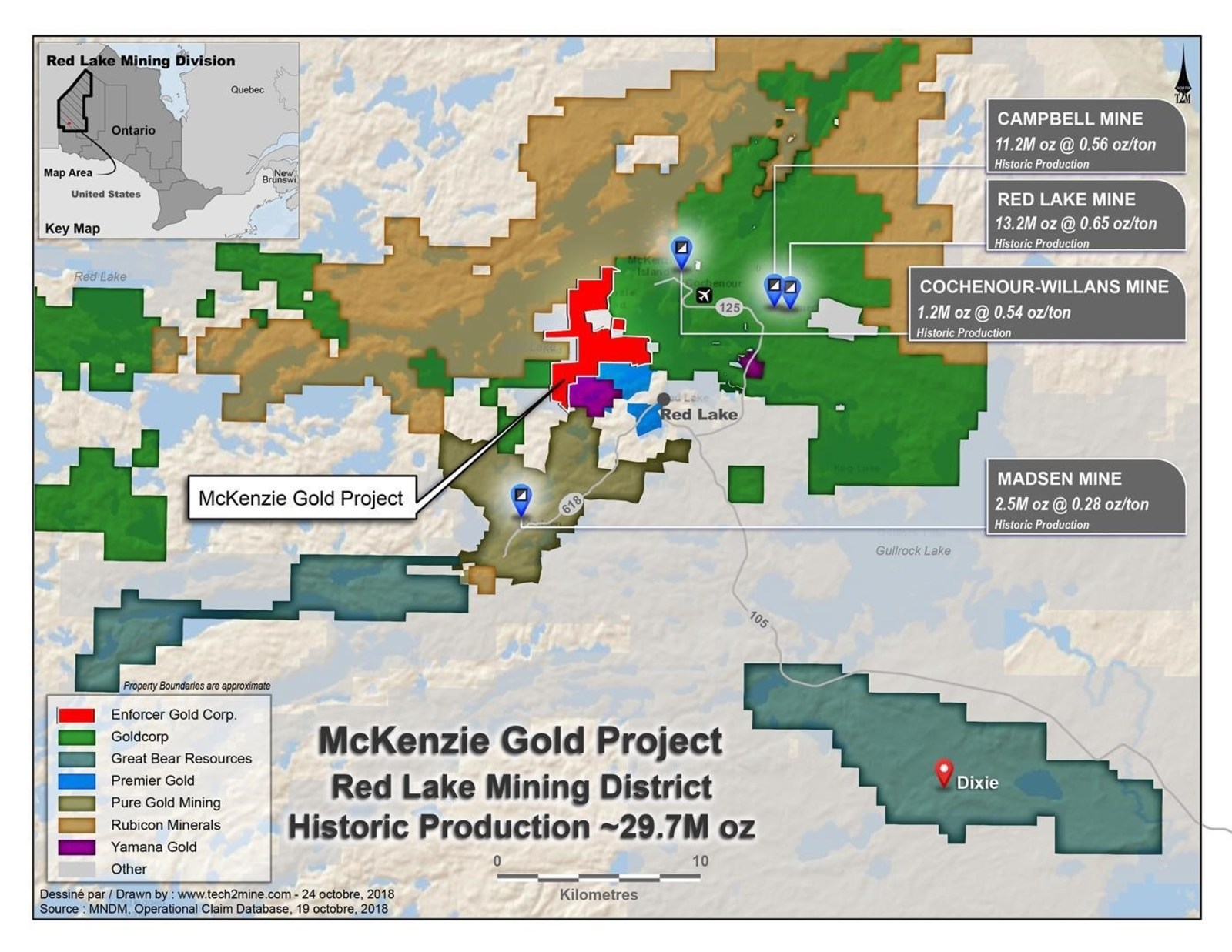 Highlights of the McKenzie Gold project include:

“One of Enforcer’s mandates is to strengthen its portfolio of gold projects in mining-friendly jurisdictions that have strong production records and high potential for further discoveries. To that end, we are delighted with this opportunity to acquire a large and well-positioned project in the renowned Red Lake Gold Camp where historical gold production and current reserves exceed 30 million ounces. Recent exploration successes in the camp, like those of Great Bear Resources, have outlined new geological settings for gold mineralization and highlight the fact that a 100-year gold camp remains underexplored in some areas and has more to give in terms of significant gold discoveries.”

The McKenzie gold project is situated in the core of the Red Lake camp and is directly surrounded by the most prominent players in the district, including Goldcorp, Yamana, Rubicon, Pure Gold and Premier Gold.

The project area is centered on the regionally significant Dome Stock and bounded by several district-scale gold-bearing deformation zones (“DZ”). The northeast edge of the project is bounded by the Cochenour-Gulrock DZ, which is host to the largest producing mines in the camp, the Campbell and Red Lake mines. The Post Narrows DZ borders the project to the northwest, the Pipestone–St. Paul’s Bay DZ to the southwest and the First Lake-Howey Bay and Chukuni River DZs border the southeast quadrant.

Although the bulk of the historic production at Red Lake has been hosted in mafic to ultramafic volcanic rocks, notable production has also been sourced from granodioritic to dioritic phases of the Dome and nearby McKenzie Island intrusives. The Dome hosts the past-producing Red Lake Gold Shore and Buffalo mines as well Premier Gold Mines’ Central Zone (Hasaga Project) with reported indicated and inferred pit-constrained resources of 804,000 oz (0.79 g/t) and 583,000 oz (0.76 g/t), respectively. The smaller McKenzie Island Stock located just east of the property hosts the past-producing McKenzie Red Lake and Gold Eagle mines.

Mineralization within the two intrusive stocks is believed to have originated from the peripheral gold-bearing structures related to the deformation corridors. In 2005, drilling by Cypress Development Corp. (“Cypress”) near the southern edge of the project area intersected a strongly silicified and sericite altered east-west trending mineralized zone within the Dome Stock that is 600 m long and open on strike and to depth. Quartz veining accompanied by sphalerite, arsenopyrite, chalcopyrite and free gold returned gold values in drill core of up to and 2.2 g/t Au over 6.0 m in drill hole M05-07 from 102-108 m down hole. The mineralized zone is very proximal to the contact of the Dome Stock with the Pipestone–St. Paul’s Bay DZ.

Mineralized quartz veining within the Dome Stock has also been documented in several locations within the northern portion of the property. A prospecting program carried out in 2017 revisited some of these showings and in the process discovered a new showing on the southwest corner of McKenzie Island. A 12 cm wide, low-angle quartz vein is exposed from the shoreline over a 2 mlength until being covered by till to the east. The vein carries pyrite, chalcopyrite and bornite mineralization and returned multiple high-grade gold assays in grab samples ranging from 9.37 to 331.14 g/t Au. This new discovery lies ~100 m west of a historical showing where gold values of up to 212.8 g/t are reported in the Ontario Ministry of Northern Development and Mines (MNDM) file #MDI52N04SW00076. Although the vein is limited in width and the strike length is unknown, it confirms the gold potential of the low-angle structures in this area. Of note, flat-lying quartz veins within the nearby McKenzie Stock produced significant gold from underground workings in the McKenzie Red Lake and the Gold Eagle mines.

Quartz veining and sulphide mineralization is also reported in a number of locations within the intermediate volcanics on McKenzie Island. For example, trenching in 1936 on the north shore of the island exposed a northwest-trending 10 cm quartz vein over a 19.5 m strike length and reported very high-grade gold in historic channel and grab samples. Follow-up sampling during the 2017 prospecting program returned up to 18.02 g/t Au in grab samples from the vein exposure. The southeast strike extent of the vein is covered by till.

The northern end of the project also covers the sheared contact of the Dome Stock with the intermediate volcanics to the north. The contact zone is cut by younger diorite and gabbroic intrusives that are locally mineralized with sulphides and anomalous gold. This geological setting is very similar to that observed at the former Hasaga Mine located along the southeastern contact of the Dome Stock, where current holder, Premier Gold Mines, has been reporting considerable exploration success.

Based on government records, the nine documented mineral occurrences on the property have seen limited exploration work since their initial discovery. From their descriptions, the geology appears more complex than the geological maps seem to indicate, and the different orientations of the veins bears witness to the complexity of the structures present in the area.  It appears that the deformation zones bordering the Dome Stock might have played a significant role in the emplacement and orientation of the quartz veins throughout the property.

All technical information for the McKenzie Gold property was sourced from publicly available Mineral Deposit Inventory files sourced from the MNDM, as well as the NI 43-101 Updated Technical Report on a Group of Crown Mineral Claims Located on McKenzie Island and in the Area of Saint Paul’s Bay, Red Lake, Ontario prepared for 1082545 B.C. Ltd. by Robert D. Marvin, PGeo, and dated May 15, 2018.